A house from the early 20th century. A house that has its own history and spirit.

We, Eva and Oldřich Mach are the only owners of the residence from the beginning of the 20th century. The entire residence is renovated with the historic spirit of the place combined with modern design. You will find it in a lucrative location of Prague’s Břevnov, only a 10-minute walk from Prague Castle. Our residence offers housing that respects the history of the time, the house was built and thus fits into the Tejnka monument zone in Prague’s Břevnov, one of Prague’s most picturesque places.

Our story starts with the 1st owner of our apartment house Mr. Jarolim Adam – upper officer at the state attorney’s office and a private officer. Mr. Adam was born on 4th January 1862 in Prague. He loved sports from his childhood, especially ice-skating and horse-riding. When he was a young man, he was on duty as a soldier in Hradcany – Prague castle where he was a horse-riding instructor in an indoor riding hall. After military service he was teaching ice-skating and swimming in rich aristocratic families…E.g He was teaching and riding with young countnesses in Lobkovitz palace where they had their own ice-skating rink. Or at Schonborn´s they were sledging in the evening with lampions…

Due to his words: “Ice-skating is a beautiful sport which makes beautiful body figures.”

In 1924 he was awarded a personal thanks from president T.G. Masaryk for his ice-skating art-skills because Mr. Adam made a portrait of the president on the frozen Vltava River to honour his 74th birthday.

“If I think as a profesor and philosopher about the fact, that somebody has made a picture 30 metres large, just without measuring and previous drawing, even with his legs and ice-skates and on the ice, he will stay a king of ice 40 to 50 years than somebody else will be born and will have a talent like this.” 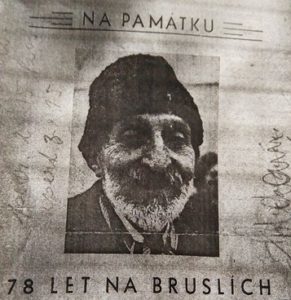